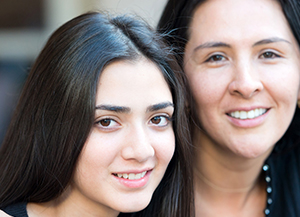 Susana is a 17-year-old Latinx client, who returned to El Centro de Amistad for treatment due to increased depressive symptoms after the pandemic. At first, Susana was apprehensive about returning to therapy, but her Mother advocated for her to get support. The client lived with her biological mother and father and her two older sisters. Susana was treated under the Outpatient Care Services Program (OCS) at El Centro de Amistad.


Susana initially presented with symptoms and behaviors consistent with Major Depressive Disorder, including thoughts of suicide. The client met with Therapist Emeli Villanueva and reported that she only wanted services over the phone, due to having zoom fatigue. Ms. Villanueva agreed to the plan and encouraged the client to try zoom if she could. Ms.Villanuevaprovided both therapeutic services of therapy and case management for the client. Susana reported not wanting to return to medication support and wanted to be medication free.


During Intake, it was identified that Susana had depressive symptoms and behaviors and was experiencing thoughts of suicide with a means or plan. The client had been in services at El Centro de Amistad previously after successfully meeting her goals in treatment. Susana reported a return of symptoms due to the pandemic of being isolated and at home on zoom for school, leading to a loss in functioning. The client set goals to maintain her safety and to use personal skills to manage tasks and met those goals in treatment.


Ms. Villanueva was able to meet with the client for weekly individual therapy over the phone and was able to provide psychoeducation on diagnosis, normalizing symptoms and behaviors, assisted the client with learning and practicing coping skills, worked on self-acceptance and self-love, assisted the client with learning and practicing effective communication, boundary setting and confidence. Susana was able to learn and practice these skills and her depressive symptoms and behaviors reduced significantly. The client no longer had thoughts of suicide within a few months into treatment. Susana was able to get a job and maintain it while in therapy. The client was able to finish High School and then reported getting into several Universities, including CSUN. At the closing of treatment, the client started to attend CSUN for her first classes.


We are happy to report that Susana was discharged in late May of 2022, and is flourishing. Susana was successfully discharged meeting her goals and showing much-improved functioning.